Growing up here in the South of the UK, we see surprisingly little of it. This, of course, may be a good thing for many as whenever a couple of inches touch down in London, the city grinds to a halt and the media collectively lose their shit.

That said, snow is one of the greatest gifts to a photographer. It changes the shape and texture of the landscape. It allows for higher contrast images, like a natural black-and-white setting. It acts as a massive reflector, adding a native glow to the ground and making night shoots easier. Best of all, it scares 90% of the population indoors and out of the way!

As such, when it snows I grab my gear and head out straight away. Earlier this year, I decided to walk my way to Milton Keynes city centre, leaving at around 0500 and reaching my destination about 0900. In that time, I got to track the rising sun and the effect it had on the landscape with so much snow around to bounce the light. Funnily enough, most of my favourite images I took from my phone and so didn’t actually need to haul my kit bag out in the cold (more on this later). 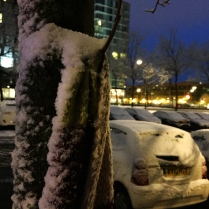 There’s no grand lesson to be had here; just that I like snow, and here are some pictures of snow. Next time it does snow though, try heading out yourself. You might be surprised how a familiar area looks after a brief dusting of the white stuff.