Unfortunately, I started the new year with a pretty nasty bug, which knocked me off of my feet for a while (also why I may have missed a blog post or two). Fortunately, it gave me time to catch up on some reading and perfecting some Photoshop composition skills.

Unfortunately it means my graphics tablet and I are no longer speaking.

So, after the turkey and cider but before the quarantine tent, the wife and I visited my family back in the village I grew up in; Upper Bucklebury. And yes, that is a real place name.

Growing up in the area I would spend inordinate amounts of time in the nearby woodland, a huge body of forest that curves along the top of the valley above Thatcham. Walking the dog, riding my bike, a poorly-conceived snowball fight amongst pretty thick undergrowth; it was great, and a big inspiration on how I take in the world around me. 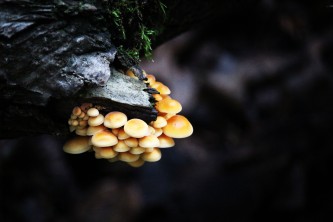 Where the cycle path cuts through the top towards Thatcham, the trees are pretty small and far between, allowing for the larger birds of prey to weave their way through, but as you head downwards you find the trees, ever fighting for the sunlight they need to survive, have grown to massive heights, with dark green leaves on thick branches that leave the pathways below in darkness.

It’s a very peaceful place, quiet save for the creaking of the trees and the occasional brush of a herd of deer bounding away. In fact, at night it’s completely terrifying, but that’s a story for another day.

To say nothing of the panther that a friend and I were actually convinced we had seen.

So, while I was down there I figured I would head out for a walk and take the camera with me. I was not expecting what I saw as I entered the Common.

A huge swath of forest, about the first ten/fifteen minutes of the walk, has been stripped away and fenced off. The path on either side has been left untouched, but the naked curves of the land are painfully clear where once there was thick growth.

Needless to say, I was a little taken aback. It’s a very stark change, and certainly a shocking one to see out of the blue. I won’t pretend there was a drop-to-the-knees-“Nooo!” moment, but I was a little upset. You see, for all the time I had spent in the Common, all those weekends and evenings, I had taken virtually no pictures. In fact, the only ones I could find were some 35mm prints that I had taken putting a new camera through its paces.

And a good chunk of those seem to be gates.

Now, I’m not writing this to incite mass rebellion against those that stole our trees. In fact, in the images above you can clearly see that new trees have been planted. This post isn’t designed to highlight the issues of Bucklebury Common, as there may well have been a very good reason for what has happened, and only a part of the area has been stripped back. Instead, I just want to illustrate that something I took for granted is gone, and even once it has regrown, but it won’t be the Common that I grew up in.

I don’t have any pictures to reminisce over, nor any photographs to show my future kids when I tell them about that panther whichistotallystillouttherebytheway.

The point I am trying to get at is those places, and even people, that you associate with your life might not always be there, and you won’t necessarily get a forewarning to prepare you for it. If there is a place that is important to you, go out and photograph it now. Take it in one more time.

Now, I’m not saying that your memories aren’t a tangible thing without photographic evidence to qualify it, but if you are like me and enjoy plotting those moments of your life in images, take the time to go out and capture those memories now.